The amount of traffic that takes place over your marble floors may also make a difference in the marble polishing process, especially when it comes to how often you will require it. Even with regular maintenance, it is the small abrasions and slight wear of high amounts of foot traffic that build up over time and then cause natural pathways on your marble floor to look dull or less beautiful in comparison to other areas.

Here are some valuable Maintenance Tips for your Marble:

What Can Ruin Your Marble Floors?

Sand and grit carried from outside by shoes can easily scratch and abrade the marble surface like a sandpaper. Unprotected furniture legs may leave scratches too. Dragging heavy objects or sharp items on the floor can cause verydeep scratches or gouges that may be permanent.

How To Restore Marble Floor?

Prepare the floor for flattening. This part of restoration is the most powerful and dynamic. It’s lippage removal or flattening. It step consist of grinding and leveling floor. Even new installed marble tile floor can have some tiles be upper or lower of floor flatness. This step removes all ledges, roughness and brings flatness to marble floors. Also, this step can remove the deepest scratches and stains.

Marble is a metamorphic rock consisting mostly of calcite and dolomite. Marble is actually formed by the metamorphism of limestone, over time and temperature changes. When most people think of marble, they imagine a hard stone that is white with gray markings. In reality, it can also have irregularly colored marks due to the presence of impurities such as silica and clay. 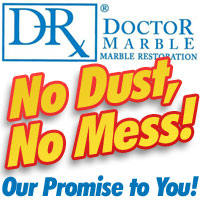 Are you convinced? Click here to request a FREE ESTIMATE, and we will come to your home or business and provide you with a quick, 100% commitment free quote, in no time.

We respect your privacy. Any and all information collected on this site will be kept strictly confidential and will not be sold, disclosed, or loaned!

Any information you provide will be held with the utmost care and will not be used in ways that you have not consented to. If you have any questions, please feel free to call or e-mail us.